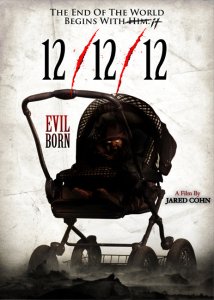 We open with a nude woman tied to a table with a dude smearing blood all over her and then human sacrificing her (I don’t know about you, but I think this is THE BEST way to start a movie; unfortunately, it’s all downhill after that). Sometime later, a woman gives birth to a demon baby that immediately strangles the delivery room doctor and nurse with its umbilical cord. Despite that, the couple is allowed to take the baby home, where it promptly bites her nipple, then later wakes her up in the middle of the night in the most WTF way possible (let’s just say it headed south from the nipple), and then kills the husband. The cops and Child Social Services show up and want to take the baby away, which the mother objects to, even though it’s obviously a creepy killer demon baby from hell. Anyway, the chick from CSS takes the baby and is promptly killed by it, so it is returned to its mother. For some reason, nobody seems all that concerned that the baby is killing everyone in sight and going down on mom. Meanwhile, some underwear-model-lookin’-dude is trying to steal the baby… for Satan!

This movie was dumb. The dialogue was dumb. The plot was dumb. The baby was dumb. The mother was dumb. The cops were dumb. Everything was dumb. But, it was also pretty funny. And watching the baby attack people even though it seemed otherwise completely unable to move was borderline hilarious. And there were some boobs. So, overall, it could have been worse. But not much. Oh, and I guess this was a sequel to 11/11/11, which I don’t remember too much about, other than it was somewhat less dumb than this one. And, this is followed by 13/13/13, which doesn’t even make calendrical sense. I haven’t seen that one yet, but I’ll let you know when I do. 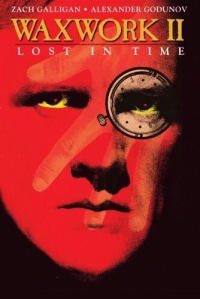 First, the bad news: Deborah Foreman’s character, Sarah, has been recast. The good news: The replacement actress is Monika Schnarre, who looks like Daryl Hannah, but hotter. We’ll go ahead and mark this in the “win” column, even though I have fond memories of Deborah’s scene with the Marquis de Sade in the first movie.

This starts right where the first movie leaves off, with Mark and Sarah escaping the burning waxworks in a handy taxi. Unbeknownst to the pair, the reanimated zombie arm from the first movie’s Night of the Living Dead vignette hitches a ride and ends up back at Sarah’s place, where it kills her abusive step-dad with a hammer and then attacks her with hot dogs and mustard. She is promptly charged with murder when no one believes the killer hand story, and Mark and Sarah are forced to delve into the waxworks mythos to try to find evidence to exhonerate her, and because it’s a great way to throw them into some more homagey vignettes.

The vignettes this time around are much more elaborate, and feature tributes to Frankenstein, Alien, Evil Dead, Excalibur or something, Dawn of the Dead, Nosferatu, and others. And even though the first Waxwork was billed as a horror-comedy, this one goes much broader with the humor, getting quite slapsticky at times. Even outside the Evil Dead segment, the influence of that classic series is quite apparent, going so far as featuring an extended cameo from the man himself, Bruce Campbell. One could argue that they go a bit far with the silliness, but this is still a pretty fun movie, and it’s apparent that the filmmakers had fun making it. Worth a watch, even though there’s still no boobs.