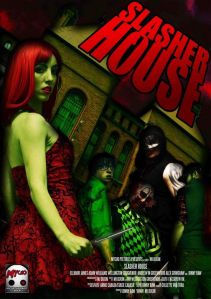 We open on a nude and unconscious young woman (8/10 would bang) with unnaturally red hair laying on the floor of a jail cell. Soon, she wakes and wonders, how did she get here? She opens a locker and finds a frilly dress in red and black with a post-it note that says “Wear Me.” After some more butt shots of her screwing around in the cell (I’m not complaining), an alarm goes off and the cell door unlocks. Realizing she’s still nekkid, she decides she should probably heed the post-it note and put on the dress (sad face).

As she explores what seems to be an abandoned prison, she finds a whiny dude in another cell. We learn that, while neither of them know why they’re there, the whiny guy remembers things from before, but the girl doesn’t remember anything, even her own name. We’ll call her Red.

Soon, another alarm goes off, indicating a door has been unlocked, but it’s not the one to Whiny’s cell. Red goes to investigate, and finds that a creepy killer clown with a history of child murder has been released from his cell and is very interested in seeing Red’s insides. In very short order, Cleaver the Clown has Red pinned down and is about to start hacking away, when he is stabbed in the back by Whiny. Red and Whiny team up and start trying to find a way out. They soon find other unsavory denizens, each locked in their own cell and waiting to be released. But which are the hunters, and which are the hunted?

This was a well-made low-budget romp with above-average acting (thanks, British thespians!) There were a few missteps and questionable decisions in some of the confrontations with the baddies, but nothing that can’t be forgiven. Photography and gore effects were quite good, each character was given enough of a backstory to make them interesting, and Red has a nice ass. While the plot had a somewhat paint-by-numbers feel to it, there were a few twists (some more successful than others) along the way, and the baddies were entertainingly comic bookish. Overall, it’s probably worth a watch.

“It Knows” opens with a scene of family terror. Young Claire and her mother are hiding out from Claire’s father Monroe, who is a monstrous figure in her life. When he eventually finds them, his rage is unleashed and only Claire survives. Years later, Claire is happily married to an understanding and caring man, and they have two beautiful children. But Claire finds herself trapped in her house by a mysterious force, and her family is nowhere to be found.

Claire is shattered, a woman unmoored from reality by her brutal childhood. The puzzle-piece structure of “It Knows” reflects Claire’s fragmented existence; she opens a door to the outside and finds herself back in her house, unable to escape; she turns a corner and finds a masked specter confronting her with her deeply buried pain; and finally, she is led further down the spiral of depression and mania by her younger self, until she is finally unable to avoid facing the truth of her past and must take action to protect herself and her family from the growing evil that surrounds her.

“It Knows” is a very dark psychological horror that goes places many will find very disturbing. And yet, it is also a frenetically paced survival horror with shocks and scares aplenty. These two horror sub-genres are blended seamlessly by co-writer/directors Mark Maness and Rob Winfrey, and are given life by the strong performances of Carmen Patterson as the desperate adult Claire, Dan Michael as the sinister and brutal Monroe, and, most of all, the outstanding performance of Lauren Lasseigne as the terrorized 9-year-old Claire. It is her scenes in particular that can be tough to watch, but those that do will find themselves challenged by a harrowing narrative that pulls no punches in exploring its deeply emotional territory.

First, the bad news: Deborah Foreman’s character, Sarah, has been recast. The good news: The replacement actress is Monika Schnarre, who looks like Daryl Hannah, but hotter. We’ll go ahead and mark this in the “win” column, even though I have fond memories of Deborah’s scene with the Marquis de Sade in the first movie.

This starts right where the first movie leaves off, with Mark and Sarah escaping the burning waxworks in a handy taxi. Unbeknownst to the pair, the reanimated zombie arm from the first movie’s Night of the Living Dead vignette hitches a ride and ends up back at Sarah’s place, where it kills her abusive step-dad with a hammer and then attacks her with hot dogs and mustard. She is promptly charged with murder when no one believes the killer hand story, and Mark and Sarah are forced to delve into the waxworks mythos to try to find evidence to exhonerate her, and because it’s a great way to throw them into some more homagey vignettes.

The vignettes this time around are much more elaborate, and feature tributes to Frankenstein, Alien, Evil Dead, Excalibur or something, Dawn of the Dead, Nosferatu, and others. And even though the first Waxwork was billed as a horror-comedy, this one goes much broader with the humor, getting quite slapsticky at times. Even outside the Evil Dead segment, the influence of that classic series is quite apparent, going so far as featuring an extended cameo from the man himself, Bruce Campbell. One could argue that they go a bit far with the silliness, but this is still a pretty fun movie, and it’s apparent that the filmmakers had fun making it. Worth a watch, even though there’s still no boobs. 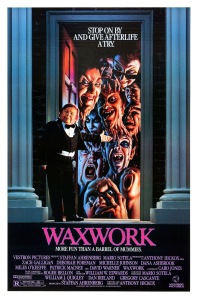 A waxworks opens in the middle of a suburban neighborhood for some reason. A group of twenty-something trust-fund losers get invited to visit after hours by the owner, the always excellent David Warner. When the arrive, they are greeted at the door by a midget best described as a white version of Tattoo. Left to explore the disturbingly realistic tableau, they are soon drawn, one by one, into the scenes, and find they are even more real than they appear.

First off, this is not to be confused with Haris Pilton Paris Hilton’s House of Wax from 2005. This is, in fact, a fun little film from the Golden Age of Horror, that wonderful decade known as “The 80s”. The bulk of this movie is taken up with the trust fund kiddos exploring, being trapped in, and, for some of them, dying in little vignettes that reference classic horror monsters like the mummy, the wolfman, and even a nice black and white homage to The Night of the Living Dead. By far the most memorable vignette is the super-hot scene with Deborah Foreman’s character falling victim to the Marquis de Sade. While this is certainly far from the best of the 80s, it’s reasonably entertaining and worth a watch. Recommended.