Opening scene: It’s the 1950s and a sadistic serial killer is about to be executed for his crimes. Some shit happens, he kills a couple of guards and almost escapes, before finally being fried in the electric chair.

Cut to: Some young’uns are going camping and lock their cellphones up in the van’s glovebox (could this possibly be relevant later?!!!) As they drive past a cemetary, one of the girls says everyone should hold their breath because spirits might be roaming around and get sucked in as they drive passed. She says this is a thing, but nobody else in the movie has ever heard of it, but of course it must be a thing. Everyone reluctantly agrees, but the pot-smoking dudebro coughs on his pipe and ends up sucking in the serial killer’s spirit, dooming everyone to a horrible, painful, and somewhat entertaining death.

So, first, when Katrina Bowden is only the second-hottest chick in the movie, you’re in good shape babe-wise. The hottest chick seems to be dressed like Lara Croft for some reason, but I’m good with that. Later she is naked in a completely gratuitous (best kind, obviously) sex scene. There’s also some other nice boobs. Plot is bog-standard but executed (heh) well enough. Worth a watch for boobage and a couple of silly but impressive death gags. I gotta knock it for too much CGI gore though, that shit just don’t look right. 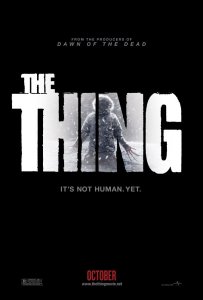 I avoided this when it first came out since I thought it was just another opportunistic remake of a classic movie (the irony being, of course, that 1982’s The Thing was also a remake of a classic movie, but we’ll ponder that another time). Two things made me decide to go back and check it out: It’s more of a prequel than a remake (despite having the same title), and it was written by Eric Heisserer, who wrote 2016’s “Arrival”, which looks to be quite good.

So, this does indeed explore the events preceding “The Thing” (1982), covering the finding of an alien spaceship and the accidental release of the alien survivor. While certainly not as good as the 1982 movie, it is a solid action/horror with some very creepy effects, which were an odd blend of practical and CGI. Definitely well-made and worth a watch, it captures at least some of the claustrophobia and creepiness of the 1982 “The Thing”.