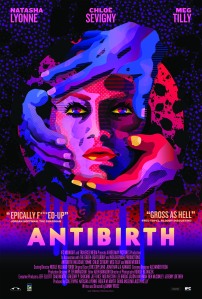 Lou (Natasha Lyonne) and Sadie (Chloe Sevigny) are super-skanky junkies who like to party with pimp/drug dealer Gabriel. After a night of drug-fueled partying, Lou begins to show symptoms of pregnancy, even though she is sure she hasn’t had sex in months, which nobody believes because she is a total ho. Over the next few days, during which she continues drinking heroic amounts of alcohol and sucking on a huge bong, her symptoms become increasingly, and disgustingly, bizarre. She is befriended by Lorna (Meg Tilly!), who talks about aliens and weird abuse at the hands of the government. As they investigate Lou’s condition, they learn of a shadowy rich benefactor to Gabriel, who is getting girls from him in exchange for a strange new drug, which may have been given to Lou at their last party. What happened to Lou at this party? And why is Sadie spending so much time with Gabriel? Does she know more than she is letting on?

This, right here, is the shit. This is a motherfucking horror movie right here. Natasha Lyonne gives a fantastic performance as the tragicomic Lou, whose drug-laden body horror seems as much an extension of her terrible life choices as it does the result of some mysterious conspiracy. This movie is filled with bizarre characters and happenings, but they flow naturally from circumstances, never seeming like weirdness for weirdness’s sake. She views her increasingly desperate situation as just one more shitty thing that’s happened to her in her already shitty life. Even Lorna, her protector and advocate, is a freakin’ loon. It’s all just another day in the life in the seventh circle of hell that is thug life in Michigan. This is one of the most fucked up movies I’ve seen in a long time, and it is glorious.